On the piano students resource page you will find information for recommended pianos, metronomes, mobile music applications and computer software.

If there is a particular song you're looking for which is not in any of the anthologies found below or you just wish to purchase one song sheet, please visit one of these websites:

You will be able to pick the key and piano accompaniment type for the song. Most of these song sheets are also digital scores so don't forget to download the free app to access all the features it has to offer. 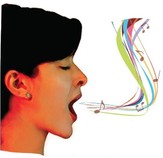 One of the cornerstones of learning to sing is knowing how to breathe correctly and learn to control your breathing so that it is used to optimum effect when you sing.

When we are born our breathing is naturally correct, babies can breathe, yell and scream with optimum effect because they use their lungs without conscious thought. As we grow older, some people become lazy in their habits only using the upper part of the lungs, taking a shallow breath instead of a normal one.

To understand how correct breathing and breath control works, first you need to understand the process that it uses to operate.

Surrounding your lungs is a muscle system called the diaphragm which is attached to the lower ribs on the sides, bottom and to the back acting as an inhalation device. When you breathe in the muscle lowers displacing the stomach and intestines. When you breathe out the diaphragm helps to manage the muscles around the lungs (abdominal muscles) control how quickly the breath is exhaled.

This is where the 'control' comes into play - the singer expands the lungs by inhaling and 'controls' the amount of air expelled when singing a note by allowing the muscle support system to remain expanded - this doesn't mean the stomach is pushed out, rather that it is blown up like a balloon when the air goes in and the singer slows down the natural rate at which it goes down. In most people the breathing is shallow and only the top half of the lungs are used - breathing correctly uses the whole of the lungs so that more air is available, the singer then uses the natural action of the muscles (diaphragm and abdominals) surrounding the lungs to control the amount of air that is exhaled when singing a note.

Remember, the diaphragm doesn't exhale for you - just helps to control the amount of air exhaled. Source: http://www.vocalist.org.uk

To locate the diaphragm, go back to the last time you had the hiccups, that muscle you felt involuntarily (and annoyingly) moving up and down was your diaphragm. If you’re still unsure where it is, find your sternum and walk your fingers straight down to where your ribs are. Now, pant like a tired dog, there is no way of doing this without using your diaphragm.

Seventeen Breathing Exercises
These exercises should be practiced between three to five times a week switching to a new exercise every two weeks. Work on these before singing, they'll warm up your entire body.
Breathing Exercises.pdf
Adobe Acrobat document [46.4 KB]